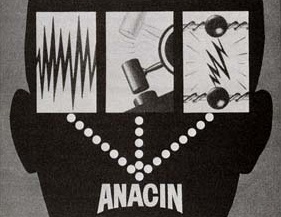 According to a recent report published by Hubspot, headlines that include bracketed information [infographic] achieved a 38% higher click through rate (CTR) than headlines that didn’t.  Inclusion of infographics isn’t new. The infographic above was created in 1956 for Anacin — and helped increase sales by 200%. Bracketing it in the headline would never have happened. Did it work for you?

The paper also upended one of the most commonly cited “rules” of headline writing – that a copywriter should use the words you, new, now, easy and free as often as possible.

In the brave new world of social media “you, your and you’re” are considered pushy. (‘You don’t know me!” thinks the reader to him or herself, apparently not concerned that they don’t know who they’re talking to either.) “Free” is cheesy, “Tips” are patronizing.

Hubspot also notes that “Who” is more appealing today than “Why” or “How”. “Who” increased CTR by 22% — “Why” decreased CTR by 37% and poor “How To” performed 49% worse than headlines without this phrase.

The most useful takeaways for me were that headlines of moderate length (81-100 characters with spaces) generated the highest levels of engagement — and that putting the topic first (Social Media: Who’s Blogging Now?) made content more searchable. Nice guidelines, but don’t you think the “new rules” are just as breakable as the old ones?